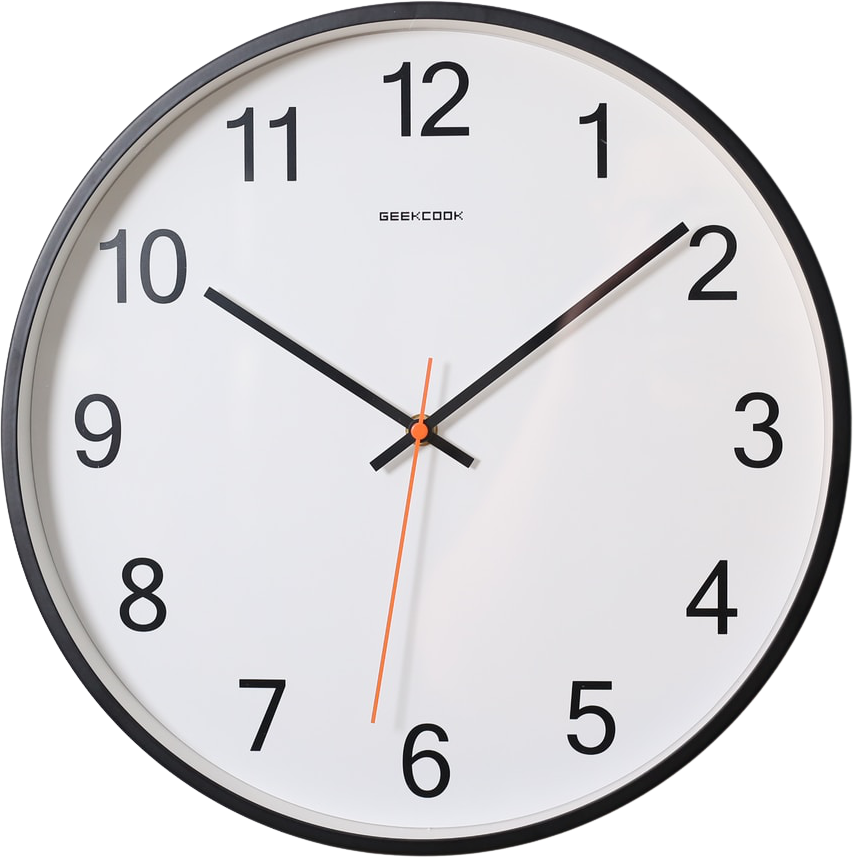 WEAR TO BE CONFIDENT (FREE SHIPPING)

The Best In Motorcycle Wear

The Best In Motorcycle Wear

When you receive your purchase , examine it carefully . If for any reason you are not satisfied with the order received from Motorbikers Apparel , please return the package to the address on the original invoice (Return shipping will be at your expense).Upon return and receipt of the product(s) Motorbikers Apparel will exchange or refund , less appropriate adjustments for shipping and handling - No questions asked . All products must be returned in good condition , in original boxes whenever possible and with all paperwork , parts , accessories , etc , to ensure full credit .

Note : We advise when returning products to use the same shipper used in delivery . Product(s) should be insured for full value .


Lifetime Warranty
Warning: If you have placed patches on your product, you cannot send it back for a refund or exchange. For both stock and custom products.
Motorbikers apparel offers a lifetime warranty against defects in material and workmanship of leather products from the original date of purchase for the life of the item.
This includes Stitching, Buckles, Snaps on leather jackets, vests, chaps, and gloves. Motorbikers Apparel will replace the item if after inspection the garment is deemed to be not in conformance with our standards. The warranty is limited to the repair of the parts and the necessary labor and services to repair the item. If the item after inspection is deemed non-repairable, Motorbikers Apparel will replace the item or if item is discontinued or not available, an item of equal value at Motorbikers Apparel discretion.
'Normal or Heavy wear of the item does not fall under the warranty". Leather will last a long time if properly taken care of. If the hide is not cared for your leather garment can break down and fail.

FREE SHIPPING IN THE UNITED STATES

Shipping Policy
Our number one priority is to ship your order the same day , if the order is received prior to 3pm EST . Every effort will be made to ship all orders within 48 hours. All orders will be shipped via UPS Ground, USPS, or DHL.

Born to Ride: A Brief History of the Motorcycle Jacket

There are few modern men's garments so undeniably iconic as the leather motorcycle jacket. It shares rarified air in the menswear world with the blue jean, the T-shirt, the oxford button-down—pieces so integral to what we consider to be men's fashion that no style-minded guy's wardrobe could be considered complete without one. Like those aforementioned garments, there’s a clear mental picture that forms when you discuss a “motorcycle jacket,” but outside of a few distinct details, there’s plenty of room (and examples both past and present) to show off the style’s potential to be rework, rethought and rebuilt. From its original beginnings as a biker’s necessity, to its position as modern-day signifier of “downtown cool,” we examine the history of the motorcycle jacket.
Follow Andrew on Instagram here. 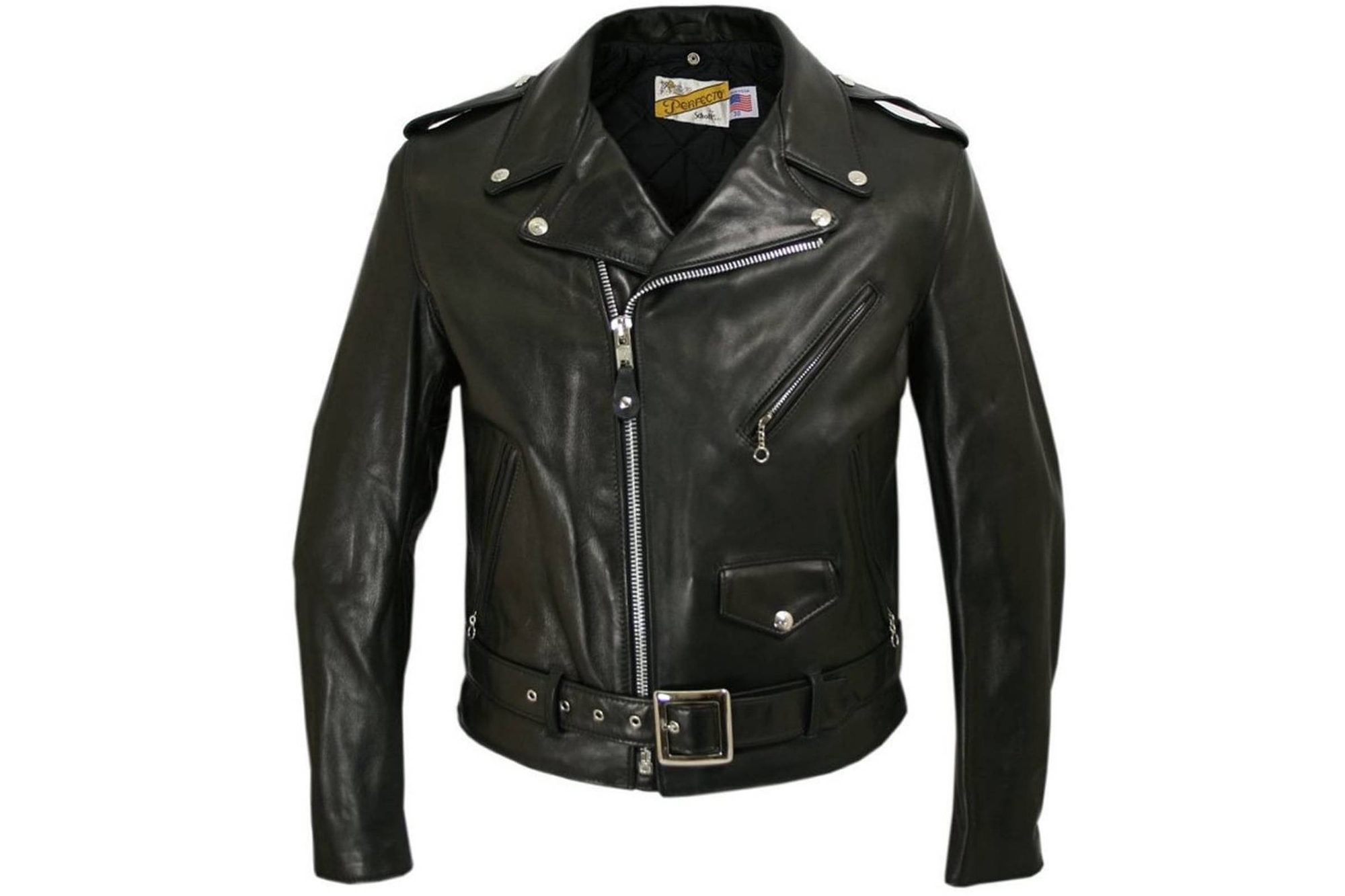 Schott NYC Perfecto 118Any discussion of the leather motorcycle jacket must begin in 1913 with the founding of Schott NYC, an apparel company began by second-generation Russian immigrants Irving and Jack Schott. They made raincoats then, working out of a basement factory in the Lower East Side of Manhattan and selling the finished products door to door. After fifteen years, Irving created a new type of coat intended for warmth, protection, and comfort for motorcycle riding. And so in 1928, the Schott Perfecto—named after Irving's preferred type of cigar—was first introduced.Schott sold them through a Harley Davidson distributor in Long Island, New York for $5.50 apiece, the equivalent of $76 today. It had a belted waist for a secure fit, an asymmetrical front closure that moved the front seam away from the center chest (more comfortable when a rider is hunched forward on their motorcycle), created a double layer of material in front for extra insulation and, as Schott claims, was the first jacket to use zippers rather than buttons for closure. The design has been lightly tweaked in the nearly 90 years since, but only lightly—an altered epaulet here, an extra pocket there, proportions subtly adjusted for a better fit. 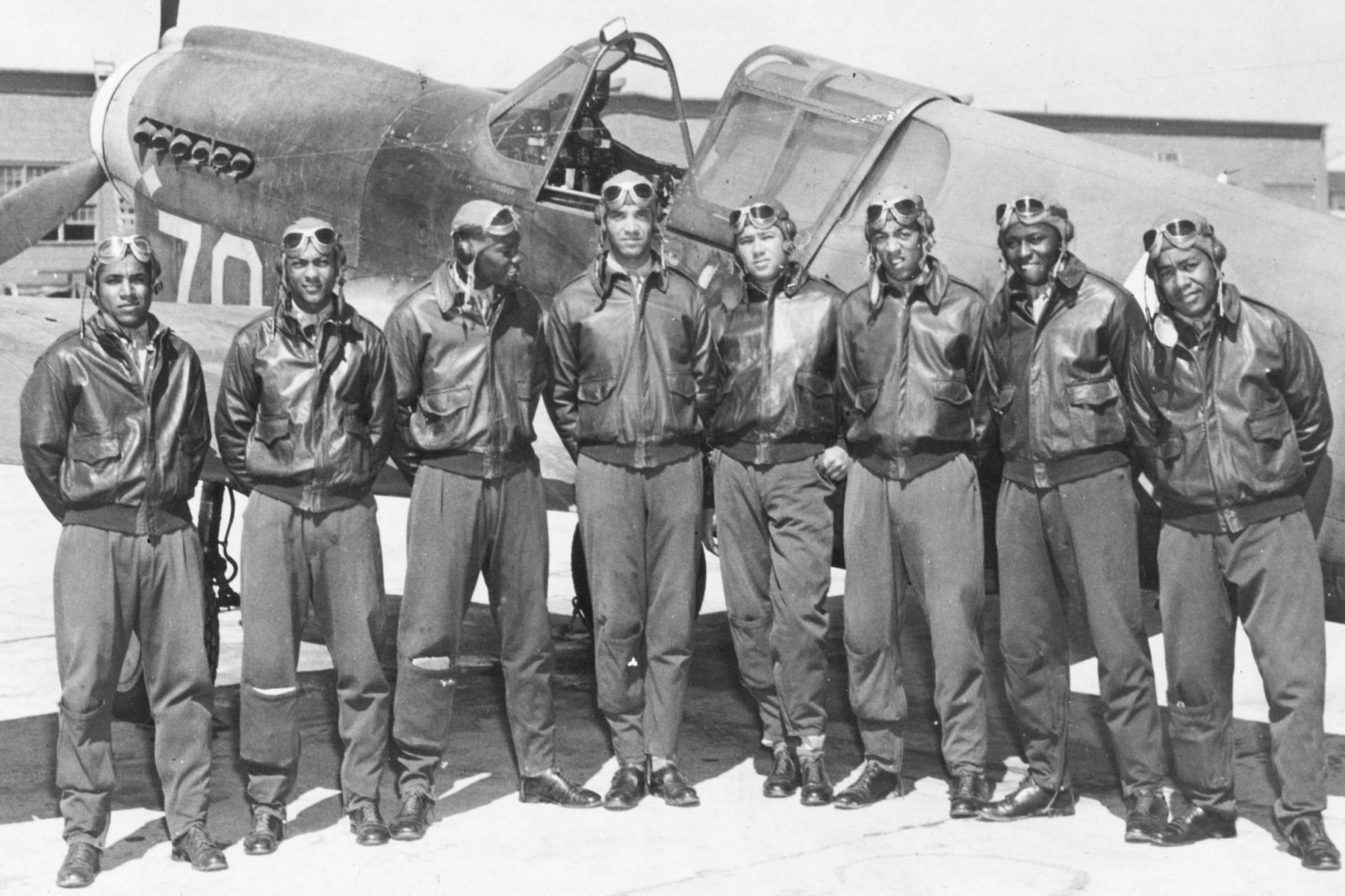 Tuskegee Airmen in A-2-style flight jacketsLeather jackets had been around prior to this, but never in the modern motorcycle style we think of today. In terms of predecessors, heavy-duty leather flight jackets with wraparound collars, wind flaps, snug cuffs and waistbands saw use in WWI, when pilots needed exceptionally thick and durable outerwear while flying at rapid speeds and at high altitudes in open cockpits. Leather coats for pilots in the US Army Air Corps (the precursor to the Air Force) were standardized in 1927 with the introduction of the A-1 flight jacket, a brown capeskin leather piece in what's now become known as a "bomber jacket" style – waist-length, lower front button-flap pockets, and snug worsted wool on the cuffs, collar, and waistband. Rather than a zipper on the center, though, the jacket used buttons, as was the standard at the time. With Schott's introduction of the Perfecto in 1928 opening the door to zipper-front jackets, the A-1 evolved into the now-iconic A-2 jacket, with a zip front and point collar, in 1931.Schott contributed their own designs to the US Military in WWII, when they were commissioned by the Air Force to create an exceptionally warm jacket for bombing crews flying in B-17 and B-24s. Airplane cabins were closed by this time, but not pressurized, and so were frigidly cold at the higher altitudes from which bombing runs were conducted. In response Schott created the B-3 jacket, a somewhat similar style to the A-2 but with a heavy sheep fur lining, a buckled collar and a full leather construction, rather than the wool-cinched cuffs and waist of the A-2. Schott also designed a melton wool pea coat, adapted from those worn by the British Royal Navy, for US Navy servicemen around this time, and continued to produce garments for the military for the next 60 years. 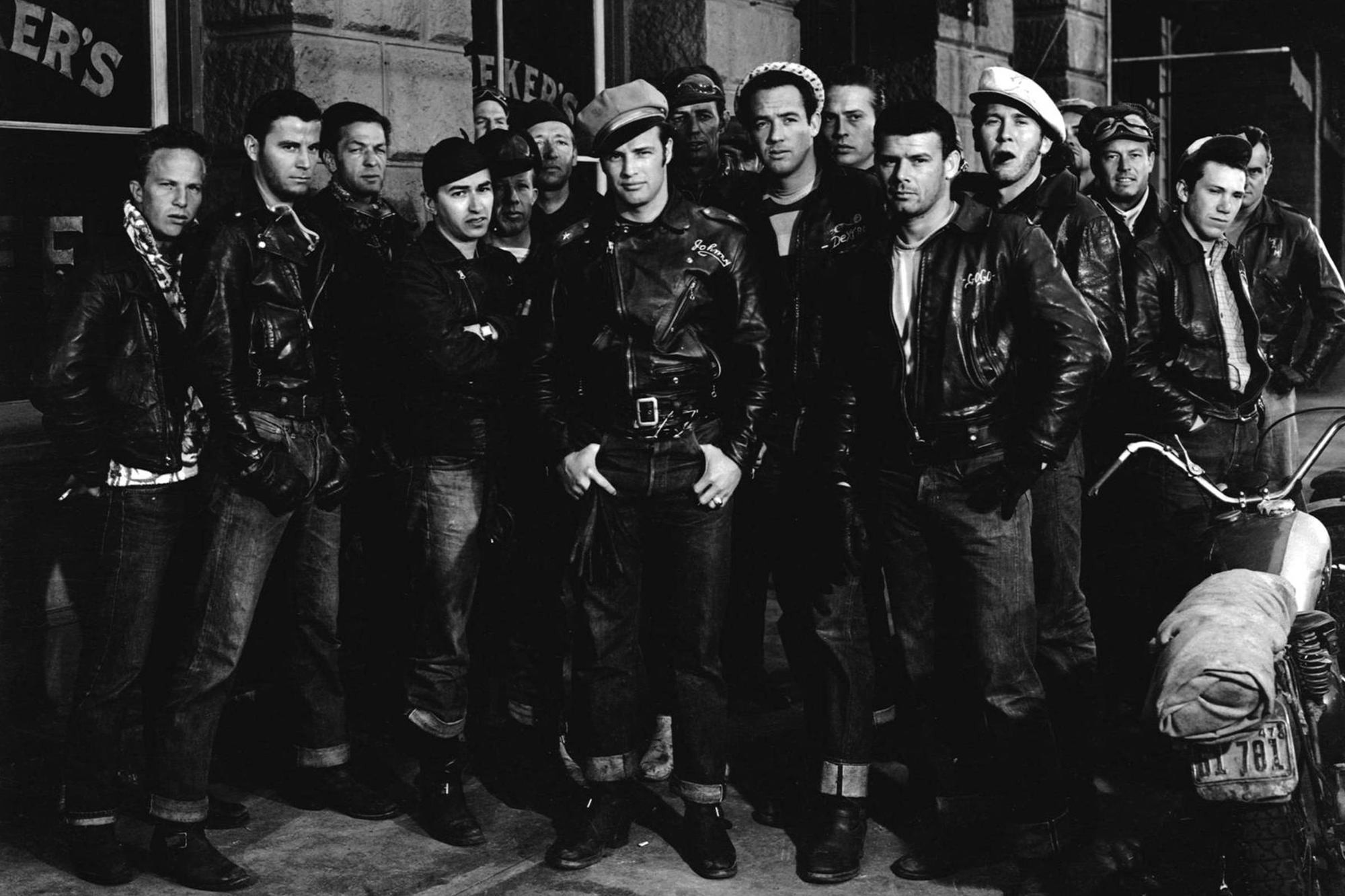 Marlon Brando in "The Wild One"Meanwhile, Schott was still producing their motorcycle jackets, albeit to a relatively limited audience. That changed dramatically in 1953 with the premiere of The Wild One, featuring a brutish, effortlessly cool Marlon Brando as Johnny Strabler, leader of a California motorcycle gang named the Black Rebels Motorcycle Club. The film was based on a short story named "The Cyclists' Raid" by Frank Rooney, originally published in Harper's magazine in January of 1951, itself based on a 1947 motorcycle rally in Hollister, CA that turned violent and chaotic thanks to a motorcycle club called the Boozefighters. While the protagonist in "The Cyclists' Raid" was said to wear a brown windbreaker, the production team of The Wild One had something else in mind: the Perfecto.Brando, wearing a version of the jacket with stars on the epaulets, his character's name spelled on the chest and his gang's insignia on the back, was a swaggering image of countercultural, hyper-masculine attitude. The young men of America took notice. Idolizing the intimidating, edgy style of Brando and his gang, they flocked to the jackets, causing a massive spike in popularity for the Perfecto. Ironically, though, Schott's sales quickly dipped during this time as school systems throughout the country banned students from wearing leather jackets, fearful of the gang culture and rebel teen stereotype of which they were emblematic.
Just a year later in September of 1955, James Dean—another icon of American cool who's inextricably tied to the motorcycle jacket's popularity—fatally crashed his Porsche 550 Spyder. While Dean never wore a leather jacket in any of his few film roles, he did wear one with a fur collar (the Perfecto included buttons on the collar so that a removable fur piece could be added) in his free time, furthering the association with thrill-seeking, rebellious youth culture. His untimely death immortalized the young actor's rebel style, leather jacket and all. 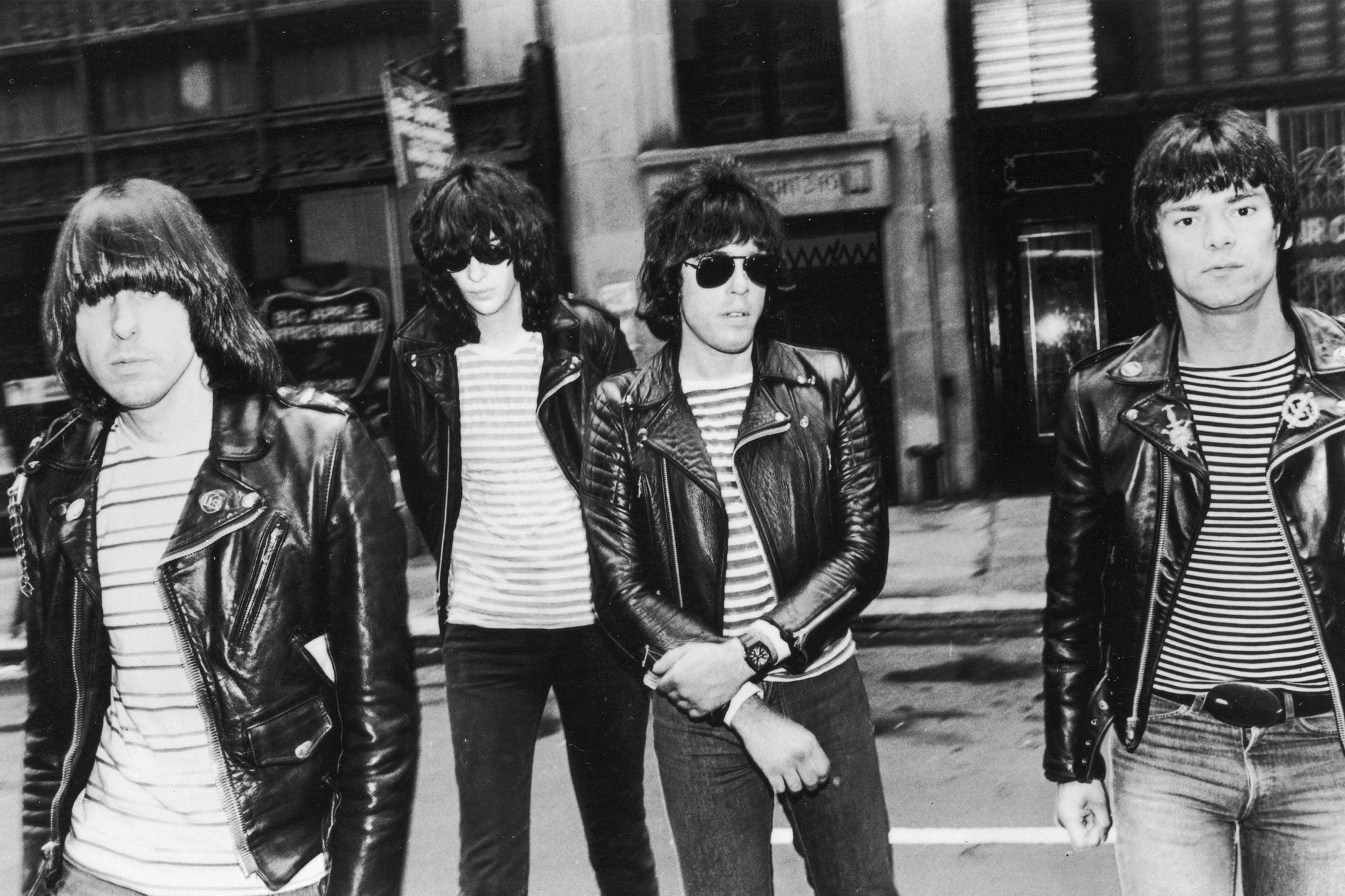 The RamonesThe jacket's popularity continued throughout the '50s, and in 1960 the high fashion world joined the fray. A 24 year-old Yves Saint Laurent, then the head of design for Dior, presented his own take on the style as part of a beatnik-inspired runway collection—a single-breasted, fur-lined alligator leather women's jacket with cropped sleeves—though the collection was widely panned by critics of the time. Ironic, given that the modern-day Saint Laurent makes what is perhaps the fashion world's most covetable example of the black leather motorcycle jacket today (look no further than the Hedi Slimane-era Saint Laurent L01 and L17 for proof of that legacy in the modern day)The jackets continue to skirt around the outskirts of popular fashion throughout the proceeding decades, taking firm hold in the burgeoning punk subculture of the mid-1970s and becoming closely associated with rock music of the time. Motorcycle jackets were practically a mandatory uniform for notable bands and the clientele of the clubs they played in at the time—Blondie, Joan Jett, Sex Pistols and The Ramones, among many others, wore the style as it continued to carry a sense of countercultural, attitude-heavy rebellion from more conservative fashion norms.